To be honest with you, I never envisioned a Thanksgiving 2015, my 66th upon this earth. When I was a kid, the year 2000 seemed like science fiction. When I was a child, I thought Christmas would never come and now it’s like a carousal, it comes around very quickly. I was out visiting yesterday: getting the application for kids who need help at Christmas and I stopped by one of our Senior Adults.

This sweet lady is 80 and lives alone in a small cottage. She gave birth to six children and has attended the COLS of three: two killed in motorcycle accident in their teens. The oldest was born in 1953. His little sister was on the cycle with him. It was a tragic night in Danville, Alabama. Then in 2009 her husband passed way on Christmas Eve. The following Christmas at a little past 12:00 none her almost 50 year old daughter was promoted. Perhaps you have faced a lot of tragedy in your life but would you want to swap places with her. She still has three children; two girls and boy and 5 grand children. She now has 6 greats, the same number she began with.

She has her pictures and her memories. A more gracious woman you will not meet. If she is not the lady in Proverbs 31, I don’t know who it would be. She has an humble and thankful attitude. That’s right, I said thankful. She told me during the visit, I am thankful for my children, grandchildren and greats and on this Thanksgiving Eve, she was excited about the all come or Thanksgiving dinner.

She and I reminisced while I was there as both of us recalled thanksgivings long, long ago. I cannot lie, as a child Christmas was the biggest day of the year. There was no day running a close second but as I have aged, THANKSGIVING my be my favorite. For one thing, it kicks off the holiday season and I know that Christmas in just around the corner. I remember our first year in Seminary: we had not planned to come home but June got both Thursday and Friday off at the hospital where she worked and we decided on Wednesday after she got home from work to load up and head for North Alabama. It was during the first energy crisis and I had one Gulf credit card which was good for gas only or a Holiday Inn. In our haste we forgot to fill up the gas tank. It had over a half of a tank which would take us a long way but by the time we got to the Alabama line, it was after 9:00 and we could not find a gulf station open. With less than 1/8 of tank, we were extremely anxious praying our heart out. Our only hope was a gulf station on I-59. In those days the interstate was not complete so we had to go through York where nothing was open. North bound we are praying: Lord let that Gulf station be open. O what a beautiful sight: it was open. You talk about happy campers; we were thrilled. Did we have any money? We had one dime that we found somewhere and it was for a pay phone if something went wrong. No cokes, candy bars or burgers just the desire to me with our family for thanksgiving. We got to Mothers about 2:00 am, crawled in a warm bed and had a great day of thanks.

My greatest THANKSGIVING came in 1986. I had been on an 11 day mission trip to Nigeria. I was a kid, green as a gourd, I got homesick before we got to Atlanta going over and I will not lie, it was the longest 11 days of my life. Out of 24 preachers, I was the only one with an assignment outside of town. Everything imaginable when through my mind. The Nigerians love to make music and it’s a lot like the music in a Tarzan movie, practically every member of choir has a drum. They don’t sit when singing, they stand and they jump, just like in the movies. I was looking around for a big pot of boiling water. I finally got acclimated the day before we came home but I was still anxious to get out of Africa. The instability there creates a certain anxiety. The Missionary who carried us to the airport [later retired in this County and came to see me at DBC a couple of time] carried us before dark. They did dare get out after dark in Lagos.

I was happy to be at the airport and the glass of ice tea that we had at the Missionaries was indeed refreshing. Once inside the airport, we had to wait three hours but I didn’t. We had flown in on a small Nigerian Airliner and that is what I expected to see but in rolls a KLM 747. I told one of the guys, “I sure wish that was our plane.” He said, “It is our plane and they are going to allow us to board early.” I have never been so happy to be on a Dutch Airliner in my life. Once in Amsterdam, I got the first bath I had had in 11 days but I was so excited I could sleep. The next day we boarded another KLM 747, after a one hour delay on the tarmac we lifted off and were Atlanta bound. I have never been so glad to see Atlanta in my life. But, there was a delay in Atlanta: the airline had plane but no crew; the crew was stuck in Detroit in a snow storm. I pestered the airline to death and after telling us in would probably be Thanksgiving, they came up will a crew and we were in the air by 9:00. I felt bad because half of the folks were not close enough to the gate to catch the plane but I warned to leave the gate area.

Be sure your sins will find you out, the little plane that we were in got caught in a horrible thunderstorm and I was already sick with dysentery and diarrhea and I spent most of my time in the john even thought I was supposed to be buckled in my seat.  I assumed we were not going to make it and begin repenting but just a few minutes later we got above the storm and it was raining lightly in Huntsville but no storm. Huntsville was a beautiful sight. June and the kids were there to pick me up and it was a wonderful ride home. We went home for THANKSGIVING the next day but I could not eat; I sat in a recliner the entire time we were there but it was the best THANKSBGIVING ever. 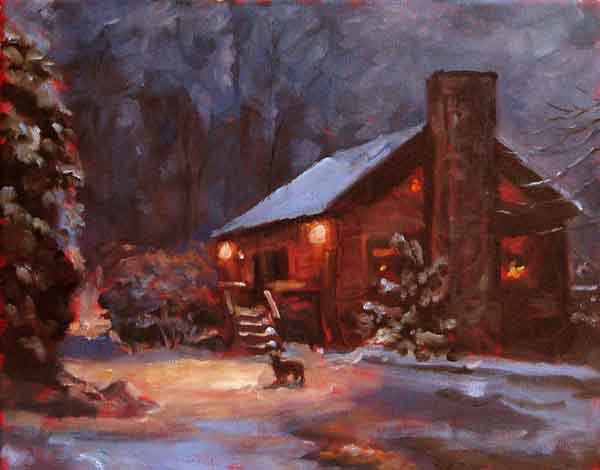